An unexpected side effect of my newfound Pinterest addiction is the urge to do crafty things. The problem is that I'm not a crafter. Honestly, to date, the pinnacle of my crafting career is that I bought a Knifty Knitter (a loom for people who aren't coordinated enough to knit properly) about 15 months ago and so far have fake-knitted about seven inches worth of a scarf. If all goes well, I should be finished it by winter. Of 2015.

Anyway, I stumbled across a DIY blog post for making amazing candleholders out of old glass jars. If there's one thing we have an abundance of in our house, it's glass jars -- that's where salsa comes from! The problem was that the plans called for Mod Podge. Actually, pretty much everything on Pinterest calls for Mod Podge. I'm surprised I haven't seen a recipe for Mod Podge cookies.

Anyway. Given my track record in the crafting department, I decided maybe I should take baby steps. So I made a much, much, much, much simpler version. First, the finished product: 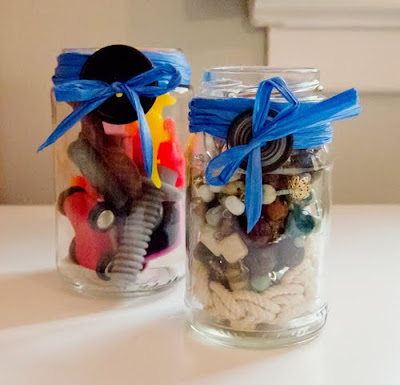 Still cute, right? And they're doing a fabulous job of holding annoyingly small clutter. One holds my jewelry* and the other holds choking hazards we've confiscated from the kiddos**.


* This isn't where I keep my jewelry on a permanent basis. I tend to take off my jewelry in the downstairs bathroom and then never have the motivation to bring it upstairs to my bedroom. Also, thanks to my love of cheap costume jewelry, there is probably a whopping $17 worth of jewelry in that jar.


** Martha Stewart would vomit in her mouth.
Posted by Kara at 6:24 PM