Seriously, I haven't even started digesting this and I had to come on and share the recipe -- it was that good. It's based on my usual pulled pork recipe, but I tweaked it a bit and added some spices and chocolate to make a Mexican-mole-inspired sauce. I love it when experiments go well :)

I totally forgot this pork was expiring (um, yesterday) and didn't fire up the slow cooker this morning, so I made it as an oven roast. But it's pretty much a dump recipe, so it would work in the oven or the Crock-Pot equally well. (Although, like most things, it would probably be juicier in the slow cooker.) 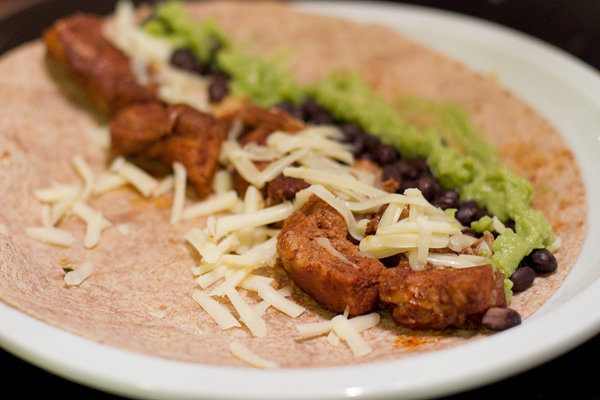 YOU'LL NEED:
FOR THE OVEN:
Throw everything in a casserole dish and cook at 350 degrees for 45 minutes (or until meat is thoroughly cooked).

FOR THE SLOW COOKER:
Throw everything in the Crock-Pot and cook on low for 7-8 hours (or until meat is thoroughly cooked).

I served it on whole wheat wraps with shredded pepperjack, guacamole, and black beans. Yum.
Posted by Kara at 6:00 PM