Yesterday's weather forecast called for ridiculous apocalyptic amounts of rain. I was okay with that, because "rainy day activities" coincidentally overlap with several of my personal favorite activities such as watching TV, drinking assorted hot beverages, and lying on the futon.

But it didn't rain, so I put my hot-chocolate-and-Pixar plans on hold and took the boys outside. I'd seen a blog post about fun DIY chemistry projects for kids, and this one was my favorite suggestion of the bunch. By which I mean it seemed like I had a 99% chance of not screwing it up.

First, I filled a water bottle with plain old vinegar and punched a hole in the cap using a grilling fork. Yep, we're running a high-end laboratory over here. Then I filled four plastic cups with baking soda, 7-8 drops of food coloring, and water. 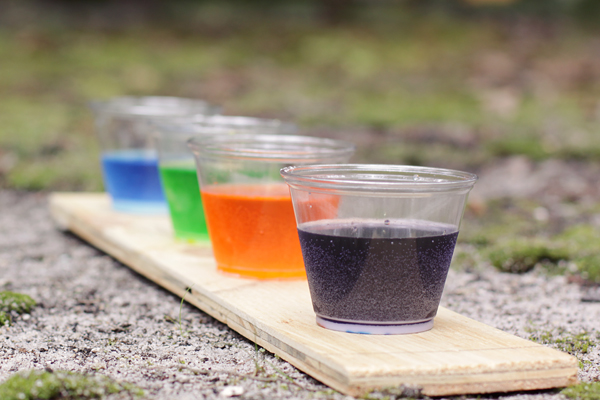 Spoiler alert: That's where I screwed up. The first step. When I poured a test drop of vinegar into one of the cups to make sure I wasn't about to drench my children with a technicolor explosion, the baking soda mixture just sparkled like a nice bottle of Perrier.

I consulted my hubby, the engineer, who told me (in so many words) that baking soda isn't exactly a strong alkaline, which is why I'm allowed to put in in cookies without poisoning anyone. He suggested I dump most of the water out and add more baking soda before administering the vinegar catalyst. He's very useful to have around.

So that's what I did. I handed my two-year-old the vinegar bottle, informed him that the usual "no dumping your bottle just for the heck of it" rules were temporarily suspended, and let him have at it. 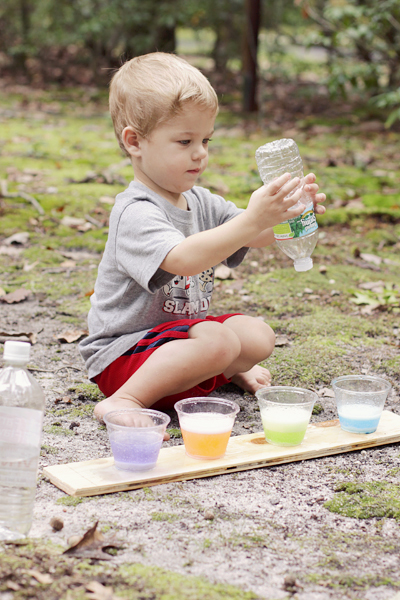 He took the job very seriously. He was having so much fun that my one-year-old -- who was busy digging wet leaves out of the trunk of his Little Tykes car -- eventually wandered over and joined in. 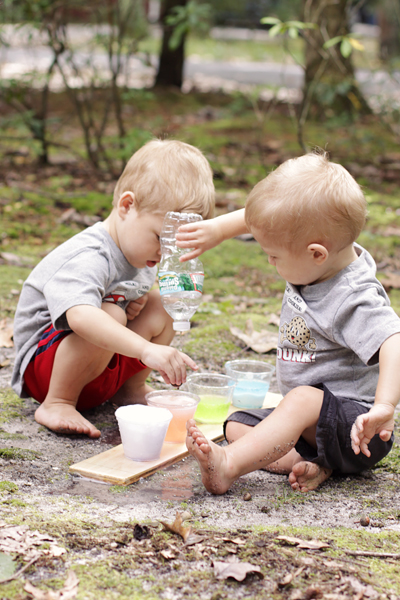 Although for the most part, my one-year-old was more interested in dunking his hands in the mixture and licking his fingers. And that, my friends, is why food is perfect for toddler science experiments. We'll move on to barium* in a year or two. 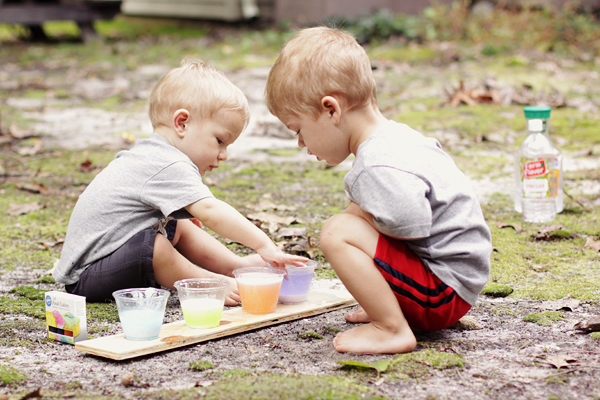 Total cost of the materials: $2. (I'm not counting the food coloring. We've had the same four bottles for several years now, and they seem to mysteriously regenerate.) And the liquid didn't stain their hands. Win-win!