First, about the title of this post: I concocted this recipe and then realized I didn't know what it would actually be called in bakery-land. Is it a turnover? A streusel? It's not a tart, right? (Or is it tarte?) So I decided to play it safe and go with pastry. That's my fancy kitchen jargon.

Anyway. I got inspired by this blog post on Eat Live Run, but needed to make a few adaptations to fit my own cooking philosophy.

So in lieu of baking my own bread, I picked up some Pillsbury refrigerated pie crusts (the rolled-up kind) and used a simplified version of my mom's apple crisp recipe as the filling. This recipe makes two braids.

FILLING:
Mix everything together. Put a little bit of flour on the bottom of a baking sheet, lay the pie crust flat, and -- leaving the center intact -- cut five diagonal slits on either side, like you're drawing a fugly Christmas tree, or the Element skateboard logo. Scoop half the mixture into the center. 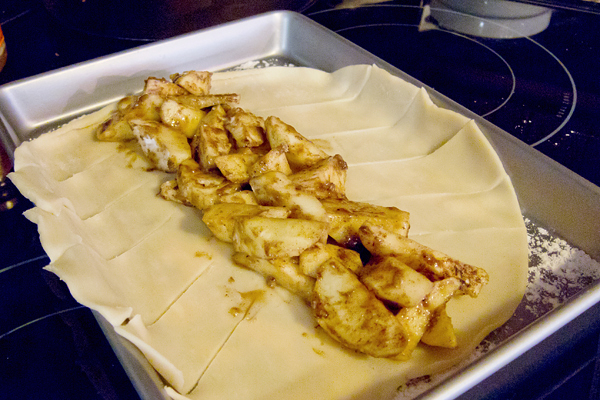 With the diagonals facing down and away from the center, start braiding your dough like you're lacing up a corset.(In the photo below, the starting point was the lower-right part.) 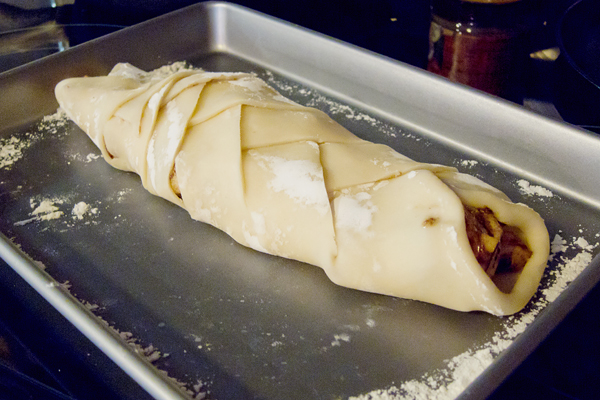 Put it in the oven on 375 degrees for about 15-20 minutes. Depends on your oven. Watch for the edges to turn slightly golden. 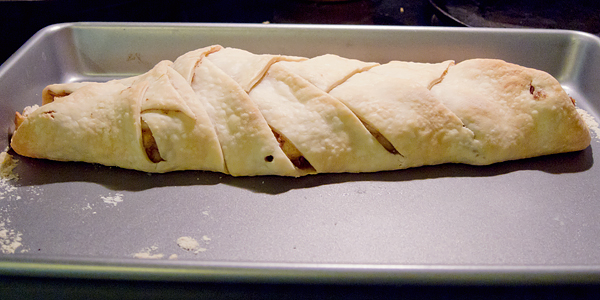 Last, you'll need to make a glaze to put on top.

Stir it up and pour it all over the braid while it's still warm. This whole recipe honestly took me about 10-15 minutes and two bowls to prepare. Not going to lie, I ate the "first draft" pretty much entirely by myself, and then took the second braid to a baby shower, where everyone polished it off. It's delish.
Posted by Kara at 9:11 PM