I'm trying to be more of a locavore. My inner hippie knows I should probably stop importing beef from New Zealand and start eating more fresh veggies from the local farms. I mean, I do live in the Garden State. And it's not just an ironic nickname.

During the summer, there's actually a farmer's market in my town every weekend, which is super-convenient. I figured that was a good place to start. 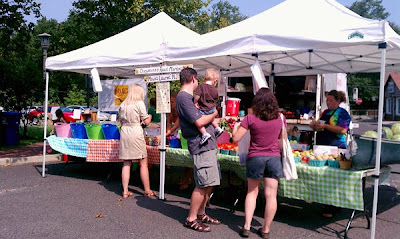 I usually pick up some free wine* and a picklesicle**, but this week I vowed to branch out and buy some proper veggies.

I ended up with a sicilian eggplant, which is the yellow thing; a zucchini; a ton of peppers in varying degrees of scary hotness; two cloves of garlic***; and a bunch of cilantro.

I also bought three cannolis but they were gone long before I took this photo. 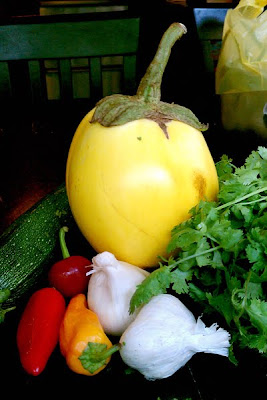 Then I got home and had no idea what to do with any of it. But after looking through my fridge, I got inspired by a half-eaten bag of Pepitos mini tortilla shells and decided to make a veggie wrap, and in lieu of marinating and grilling, let the crockpot do all the boring work.


Chop up the veggies. Everything goes in the pot on LOW for 3-4 hours. If you work during the day, this would be a good recipe to use a timer, because there's no raw meat involved. If your crockpot doesn't have a timer, just plug it into a normal outlet timer and set it to turn on halfway through the day.

Once the veggies are cooked, strain them well and scoop into wraps. I added a slice of gouda cheese on mine. <-- Yes, I have gouda in stock. I'll explain my fancy-cheese philosophy one of these days. But almost any cheese would work.

** Okay, they don't call it a picklesicle. But they should. It's a pickle with a popsicle stick in it.

*** I use garlic in almost every recipe but have literally never used fresh garlic in my life. I had to ask the girl how to use it. She said, "You can chop it or grate it." I'm sure she wanted to say, "Um, you're 32. You should know this."
Posted by Kara at 3:12 PM