I struggle with side dishes. My side-dish staple tends to be décongelés légumes congelés, which -- as you'll see if you check Google Translate -- is a very complicated and exciting dish*.

Some days I shake it up by dipping frozen cauliflower in barbeque sauce, but suffice to say that's not going to win me any culinary awards. But yesterday -- after a mere 10 years of serving bland veggies! -- it occurred to me that I can break out of the rut with stuffed mushrooms, which basically require two minutes of effort and taste like a yummy meal on their own. 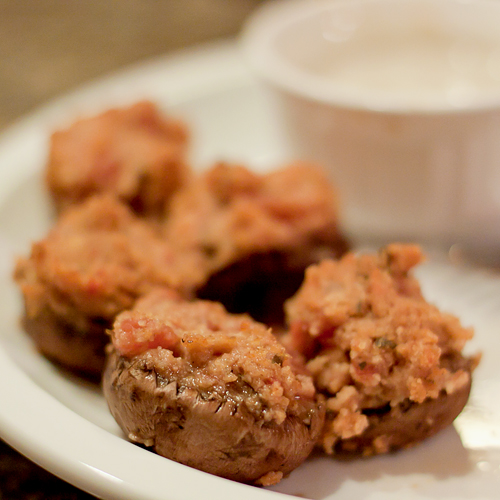 Twist the 'shroom stems to break them off and arrange them in an oven-safe dish. (I put a little bit of olive oil in the dish first.) Mix the other ingredients and scoop it into the mushroom caps. Cook at 375 degrees for 15-20 minutes. That's it!