"A house divided against itself cannot stand." -- Abe Lincoln

Maybe Abe was talking about Swiss chard? Because the leafy green turned out to be extremely divisive at the dinner table last night. By which I mean I loved it, and hubby hated it.

It started with a LivingSocial deal for Suburban Organics. Basically, Suburban Organics will ship fresh organic fruits and veggies to your door. I have trouble resisting group buys to begin with, and I love getting mail, and I love eating, and I love when things are marketed as organic or local or free trade or any other feel-good words. So hellz yeah I was getting this deal.

My box arrived a few days ago, and it contained some old faves (avocado! bananas! a medium-sized grapefruit!) but it also contained Swiss chard, which I couldn't have picked out of a veggie lineup. I posted a plea for recipes on my Facebook page. Suburban Organics was cool enough to link me to a few recipes on their site, but their recipes were a bit too...well, straight-up chard. As a chard virgin, I felt more comfortable mixing the chard with a bunch of other ingredients.

Enter Brianne at Cupcakes and Kale Chips, a.k.a. my aforementioned former foodie roommate. She sent me a very complicated recipe for Mexican sweet potatoes. I dumbed it down big-time and added ham (I needed the bone for split pea soup this week). And it was nothing short of amazeballs. 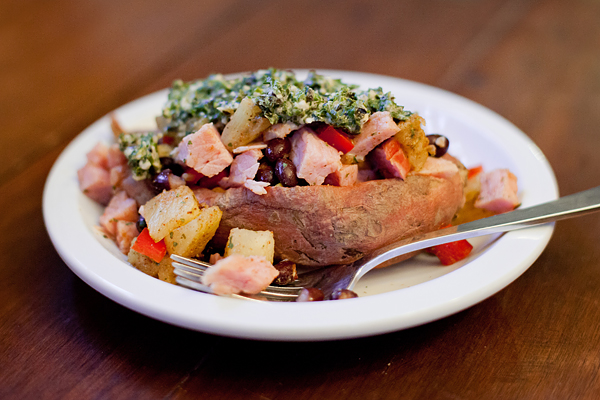 Except hubby heartily disagrees with me. His exact quote was, "Eww, what's that smell?" followed by several affirmations that it tasted as bad as it smelled, and finally, the helpful suggestion, "Don't ever cook chard again."
Me? I LOVED IT. So tasty. There were, like 17 unique and delicious flavors going on in my mouth, and it was still delicious. Imagine throwing a party and inviting your work friends, your college friends, your gardening-club friends, and your Civil War reenactment friends and everyone miraculously gets along.

Anyway. You have to be your own judge, but I thought it was awesome. (P.S. I was also directed to this tasty-looking recipe at Smitten Kitchen, but went with the Mexican recipe because I had already eaten half a brick of havarti and figured an au gratin might not be the best idea for dinner. But I'm putting it in the mental database -- clearly, for a night hubby's not home!)

STEP 1: Stab the sweet potatoes with a fork a few times, and cook them in the microwave on HIGH for about 10 minutes.

STEP 2: Rub some olive oil on a pan. Chop up the Swiss chard (I found a helpful tutorial here) and heat it in a pan with the garlic and a few shakes of Papa Joe's salt (or a mix of sea salt and black pepper). 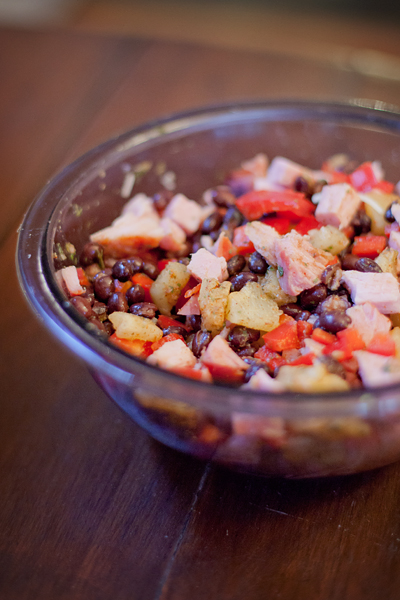 STEP 4: The chard should be pretty soft now. Add the cheese and milk to the pan until melted, then puree the whole shebang in a food processor.

(No, seriously, this is the dumbed-down version! I am telling you, my friend is nuts in the kitchen.)

STEP 5: Cut open a sweet potato, scoop in some salsa, and pour a little bit of the cheesy chard sauce on top.

STEP 6: Ignore husband who clearly has no taste buds.

STEP 7: Steal hubby's rejected cheesy chard sauce and mix it into your eggs the next morning. OM NOM NOM all over again. 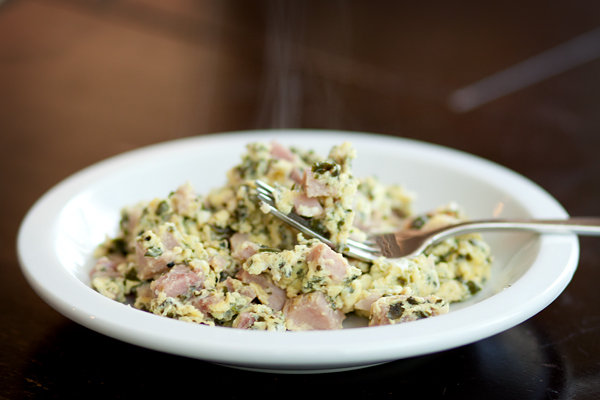 Thanks for the recipe, Brianne!
Posted by Kara at 6:47 PM