If you've ever made Indian food, you know it's a laborious, hours-long epicurean journey of chopping and rubbing and overnight-marinating and simmering and slow-cooking and hunting down approximately 1,937 ingredients you can't pronounce.

That's why I usually end up buying the Trader Joe's Indian packets. I mean, $2 and 90 seconds in the microwave, and you have tofu and veggies in a creamy curry. And it's delicious. For real, why would I try to compete with that?

Here's why: Because I bought some plain Chobani yogurt a few weeks ago, and my husband ate it before I had the chance to use it. So I bought some more, and he ate it again, and I was like, "Dude, I bought that for a recipe!"and he was like, "Oh really? Because it's been in the fridge for a few fortnights*" so I vowed to use yogurt in a recipe ASAP to prove I had a plan all along.

So I decided to come up with a chicken curry recipe that's actually semi-easy. Is it as good as real chicken tikka masala? No. But it also doesn't take longer to prepare than an actual plane ride to India, so at least I win on that front. 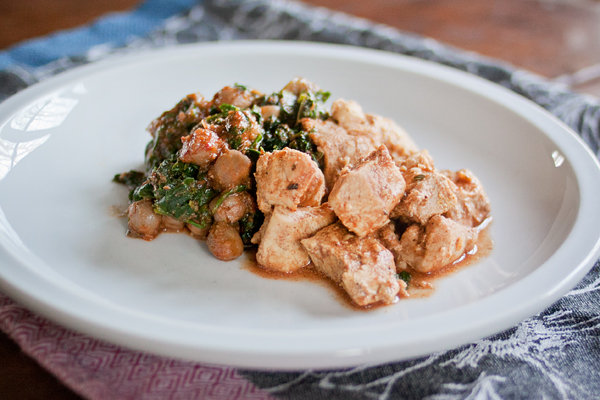 What you'll need...
FOR THE MARINADE:
FOR THE SAUCE:
Combine the marinade stuff in a large ziploc bag or bowl and let it sit in the fridge for an hour or two or three. When you're ready to eat, saute the chicken and marinade in one pan until it's cooked through, and simmer the sauce in another pot for 20 minutes. Mix them together.
For the spinach chole, I just bought a box of chole and added in 1/2 cup of spinach. I can't handle the time commitment of soaking beans, and I'll never out-chole a packaged chole anyway.
બોન ખોરાક
If that's not Gujarati for bon appetit, you can blame Google.

* I'm paraphrasing. He would never say "fortnight."
Posted by Kara at 6:31 PM