So, if you're following along, you know that I've basically spent the past week torturing my family's palates with spicy foods (well, except for the less-adventurous toddler, who's been eating a lot of rigatoni and apple slices). This was the last installment of my self-proclaimed Spicy Food Week. It definitely has a kick, which you can mellow out by using less adobo sauce*. 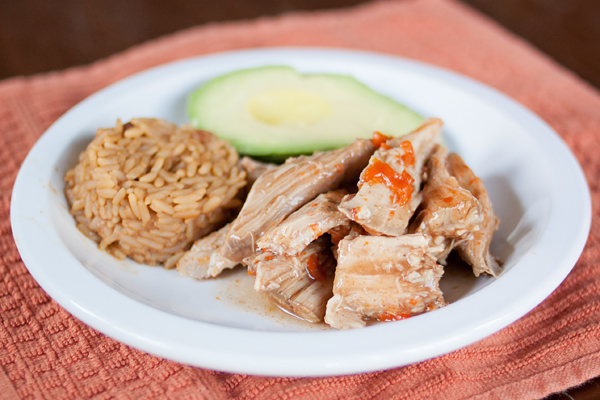 
Throw everything into the slow cooker and stir it around a bit. I plucked the peppers out after stirring, because I hate the soggy texture of canned peppers -- but pluck them out after you stir, because otherwise you'll waste a lot of sauce. (The chicken broth sort of "rinses" the sauce off the pepper. That's the best way I can explain it.) Cook on low for 6-8 hours.

I served it with a sliced avocado and Goya rice with pigeon peas**, but it would be the perfect meat for burritos, quesadillas, enchiladas, fajitas, or taco night***.


*This tip has been brought to you by Chef Obvious.


** One of those boxed mixes. I don't know what pigeon peas are, and I certainly don't cook with them of my own accord.


*** Have I forgotten any delicious uses for tortillas?
Posted by Kara at 5:45 PM