READING: Not So Funny When It Happened 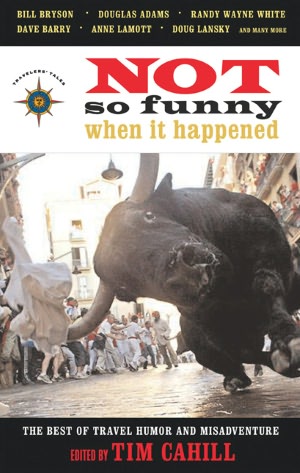 One of my favorite Henry Rollins quotes is, "Read or don't, but you can't catch up."

That said, I'm a few weeks behind on my 52-week project. I blame my heavy workload the past few weeks, which is a good thing -- I'd rather be writing than reading.

But I also blame this book. The full title is Not So Funny When It Happened: The Best of Travel Humor and Misadventure but it should have been called Not So Funny When It Happened: And Still Not Particularly Funny Now. I bought it because it featured travel stories from Dave Barry, Anne Lamott, David Sedaris, and Bill Bryson, along with about 30 others. Guaranteed win, right?

As it turns out, the only stories I liked were the ones by...Dave Barry, Anne Lamott, David Sedaris, and Bill Bryson. And even the Dave Barry piece wasn't half as funny as anything in Dave Barry's Only Travel Guide You'll Ever Need or Dave Barry does Japan. Some of the stories, like "Close Encounters of the California Kind," read like a seventh grade summer-vacation report, or a lame bar story. Some were just boring. I really related to "Fear of Not Flying," an essay about arriving at the airport obscenely early -- and having a husband who casually wanders off to the bathroom during final boarding -- but I wouldn't call it funny. Just relatable, and slightly panic-inducing.

I was so unenthused that I only dog-eared two pages, and looking back, I have no idea why I dog-eared them. I can't find anything particularly funny or thought-provoking on those two pages. I think I just felt weird having all those unfolded pages in a book.

Oh well. I'm done, and I can move on to the next. I'm six weeks behind now, so I don't know if I'll be able to catch up -- but Henry Rollins says I can't anyway, existentially speaking. So I'll just keep reading :)
Posted by Kara at 6:01 PM