At the farmers' market last week, I bought a bunch of fresh cilantro and promptly realized that I don't know what you're supposed to do with cilantro.

Then I came across a super-complicated recipe for cilantro soy chicken or something like that, and realized that a lot of the ingredients (soy sauce, brown sugar, ginger) were in my trusty bottle of Mikee teriyaki sauce. Coincidentally, I keep the Mikee sauce around because I don't know what you're supposed do with tofu, either, so I usually just dump some teriyaki sauce on it and call it a day.

It made sense to combine the two because, like cilantro, tofu is something I feel like I should be eating because it's Good For Me. But I don't have a fun way to prepare it. So, inspired by the recipe (but not inspired enough to go digging around for 14 separate ingredients), I chopped up the cilantro using the Pampered Chef Chopper (which everyone in the whole world should own) and dumped it into a half cup of Mikee teriyaki sauce.

I cooked the tofu by handing it to my husband and saying, "Cook this?"

Then I poured the cilantro-teriyaki mix over the tofu, and TELL ME THIS DOESN'T LOOK PROFESSIONAL! 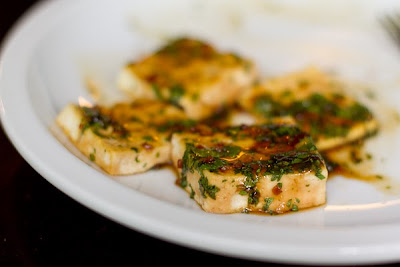 
Cook the tofu until most of the water is out, then heat up the sauce however you want (microwave? I won't judge) and pour it on. Done.
Posted by Kara at 7:53 PM