Whose Craft Is It Anyway?

I remember making a project for an elementary school science fair -- I punched holes in construction paper to show how thin the air was in the four layers of the earth's atmosphere. Lots of holes in the troposphere, not so many in the thermosphere. Easy peasy, right? Wrong. Have you ever tried to punch a hole in the middle of a piece of construction paper? How about 200 holes? And of course I started on the project around 8:30 p.m. the night before it was due. My knack for procrastination hasn't changed since the fourth grade; only my bedtime has gotten later.

Anyway, my dad helped me figure out the logistical hole punching problem through some strategic cutting and folding, and I was pretty sure my rad poster was going to take home the blue ribbon. But then another kid showed up with, like, a working centrifuge that separated blood cells from plasma. Okay, so I don't remember what he actually brought, but I remember thinking, No fair, your dad totally made that!

Anyway, that's kind of how I feel when I look through Pinterest and see kids' craft suggestions with titles like, "Easy Toddler Craft: Turn an Egg Carton into a Schooner!" I mean, seriously? Did everyone on Pinterest pass on some kind of crafty carrier gene, or are they actually doing the lion's share of the craft while their kids are busy glueing Cheerios in their hair? I really hope it's the latter, or we have some serious work to do in the crafting department around here.

I figured I'd post a sample craft from our house. Here's a train we worked on as a team today. We used a $5 kit from Melissa & Doug. In case you couldn't guess, I was in charge of the wheel stickers and painting a heart. The boys handled the rest. 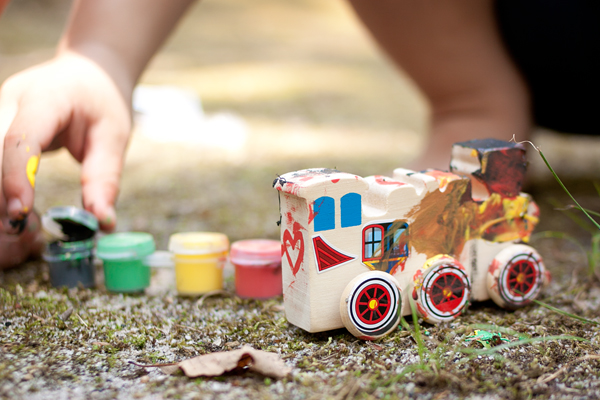 We also did a bonus bodypainting segment of craft day. 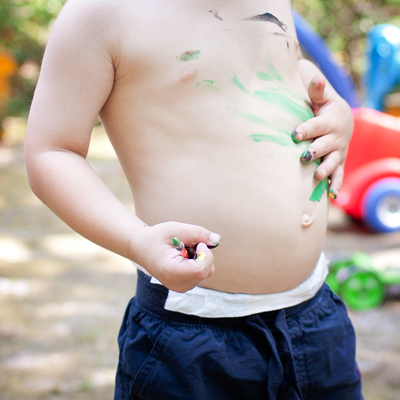 This is what toddler crafts really look like, at least in our house. Not like this or this or this.

And you know what? I don't care if other kids are making Faberge eggs in their spare time. I want my boys to do their own projects, and I think they made a pretty bangin' train today.
Posted by Kara at 3:39 PM