READING: You're Not Doing It Right 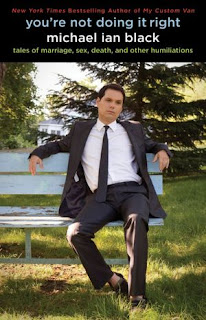 My obsession with Michael Ian Black dates back to The State (Toothbrush! Pants! Barry and Levon!). I've seen him live twice (Stella and stand-up), read just about everything he's ever written (from McSweeneys to Purple Kangaroo), and pretty much use Twitter solely to follow* him.

So it was no real surprise that I liked this book.

It was surprising that it made me cry.

In fairness, everything makes me cry, but still. Based on our two-decade stalkership, I was expecting the usual dark humor and dick jokes with the added bonus of snarky parenting stories. Which isn't inaccurate. But given that Black is fairly private and almost always in character, I was surprised at how unflinchingly honest his memoir is. He doesn't bare his neurosis in the calculated, cute way that an actress might "confess" that she loves video games and cooking shows. He bares it all in a very uncool way that kind of makes you (meaning me) want to punch him and then hug him, or hug him and then punch him. Getting his ass kicked by a fellow nerd in high school, exploiting his father's death to get unlimited access to sugary cereal, sobbing over a Creed song in his car, being the Judgmental Sober Guy at parties, threatening to divorce his wife over alarm clock settings, worrying that he's failing as a parent -- none of these stories are terribly redeeming, except in the bravery required to share them in the first place.

I'm not saying I related to everything. In fact, I want to make a point of saying that I DIDN'T RELATE TO EVERYTHING! But it was still equal parts heart-wrenching and hilarious.

And the last four pages and the appendix are pure genius.