READING: Is Everyone Hanging Out Without Me? (And Other Concerns) 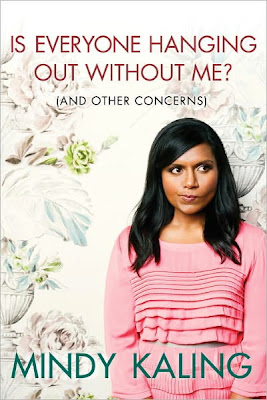 After feeling kinda lukewarm about my last two book selections, I figured I'd choose something I was guaranteed to like. I love Mindy Kaling, and I love The Office. (Yeah. I still love The Office. Even with Andy Bernard in charge, which is admittedly about 50 feet past the shark. I'm nothing if not a loyal viewer!)

This was a good call. I loved this book. Disclaimer: Bossypants was funnier. Mindy (I can call her Mindy, right? we're friends now?) actually acknowledges this in the first chapter:


Unfortunately, I can't be Tina, because it's very difficult to lure her into a Freaky Friday-type situation where we could switch bodies.... Believe me, I've tried.


But while I wish I were Tina Fey, I related more to Mindy Kaling. She rocked in high school. She liked being a nerd. She stalks celebrities. She's awkward in interviews. (I can interview Joey MacIntyre without breaking a sweat, but make me interview for a job and I turn into a babbling mess. I aim for friendly professionalism and end up just sounding manic. Great thing about freelance writing: No job interviews!) Best of all, she's a slob. That was exciting for me. The book is peppered with personal photos, including one of her desk that made me feel an emotional cocktail of relief and empathy and triumph. Her desk looks like that too! And she's wildly successful! You're ok, I'm ok!

Speaking of personal photos, she also names names in this book. Total revenge stories. Gotta love that. It almost -- almost -- makes me forgive her for hating on one of my all-time favorite songs, "Jack and Diane." I don't even want to talk about it any further.


I'm the kind of person who would rather get my hopes up really high and watch them get dashed to pieces than wisely keep my expectations at bay and hope they are exceeded.


Love it. And on a less philosophical note:


The internet makes it extraordinarily difficult for me to focus. One small break to look up exactly how almond milk is made, and four hours later I'm reading about the Donner Party and texting all my friends: Did you guys know about the Donner Party and how messed up that was? ... For every eight-hour day of writing, there is only one good productive hour of work being done. The other seven hours are preparing for writing: pacing around the house, collapsing cardboard boxes for recycling, reading the DVD extras pamphlet from the BBC Pride & Prejudice, getting snacks lined up for writing, and YouTubing toddlers who learned the "Single Ladies" dance.


Yikes. Guilty. I even have a weird love affair with paper recycling.

And just for fun, one of my favorite chapters was "Non-Traumatic Things That Have Made Me Cry," so I figured I'd share some items off my own list. Because I'm the worst. Case in point, I didn't watch a single football game this entire season. I randomly decided to root for the Patriots, with the reasoning that I'd rooted for the Giants the last time they played. (I watch every Super Bowl. Because of the snacks.) I fell asleep after halftime, and my husband -- who also ignores football 364 days out of the year -- woke me up with three minutes left on the clock to say the game was getting interesting, and would I mind switching allegiances to the Giants since they were his favorite team growing up? I agreed, and in the three minutes that followed, I managed to get so wrapped up in the game that I teared up when the Giants won. So, that's where we stand on the crying.

Other tearjerkers:
1. Ghost stories.
2. The old Budweiser commercial with the Clydesdales. Sometimes I watch it on youtube just to torture myself.
3. Every single event of every Olympics. Doesn't matter who wins -- the flag goes up over the podium, and I start crying.
4. The Taylor Swift video for "You Belong With Me," when she brings the note to prom and discovers that her neighbor brought a note, too. (Yeah. Really.)
5. Every movie ever made, with Pixar being the worst offender. That scene in Toy Story 2 where Jesse thinks her owner is taking her out to play, but really she's dropping her off at the donation bin? Shoot me. I'm still terrified to watch Toy Story 3.
6. The big reveal on any makeover show -- house, wardrobe, weight loss, restaurant, doesn't matter.
7. The first bar of the Les Miserables overture. 'Cause you just know what's coming.

This post has gone on really long, but my husband has commandeered my computer to balance his checkbook in Excel, and I'm stuck on his machine which doesn't have my software and is logged in to the wrong Pinterest. But anyway. If you've ever found Mindy Kaling remotely funny in anything, I totally recommend this book.
Posted by Kara at 6:15 PM