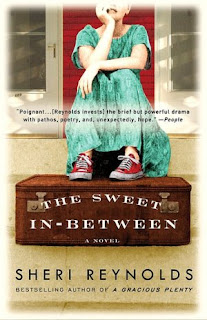 It was bound to happen eventually, so I might as well get it out of the way in the third week: I didn't love this book.

Actually, I started out hating this book. Three days into the week, I was still on page 38. I considered giving it up and switching proverbial horses, but a few friends convinced me to stick it out in case something amazing happened in the next fifty pages. I took their advice -- after all, I hated the movie Shawshank Redemption right up until the last 10 minutes, and now (like the rest of the world) it's one of my favorite movies. I had to start Harry Potter three times before it clicked, and now I'm a full-on fanatic. (I'm a Ravenclaw, and you?)

By the end of the book, I had upgraded my review to "okay." I'm glad I stuck with it, if only so I knew I wasn't missing a brilliant prison escape or acceptance into wizarding school.

Quick recap: After her mom dies of cancer and her dad is imprisoned, Kenny Lugo lives with her dad's girlfriend and her dysfunctional family. She worries that she'll be kicked out when she turns 18, and obsesses over a shooting that takes place next door. (It's described as a "senseless murder" on the book jacket, but it's more of an accidental homicide.) And...that's it. There's a lot of obsessing, and in the course of her obsessing, Kenny slowly reveals how bad her life has been and the reasons for her "gender confusion." (Spoiler alert: It turns out to be more of a defense mechanism than a lifestyle choice, by which I mean I started to feel like everyone in the book had molested everyone else at some point or another.) I did eventually get to a point where I was rooting for Kenny, but she didn't stay with me after I put the book down.

I think the main issue was that I expected a sweet coming-of-age story wrapped in a murder mystery (thanks, book jacket!) and got a slow-burning, depressing-for-the-sake-of-it family drama. Objectively, I know it was a really well-written book. But for me, I think this passage from the book pretty much sums it up:


I repeat the terms in my sleep -- rising action, climax -- and I pretend that's how life is shaped, falling action, denouement. If you know the patterns, then everything becomes bearable and everything makes sense.

But it isn't that way at all. Nothing's predictable, not in real life.... Sometimes I get stuck in one place, exposition forever. I can't get to climax to save my life. I get stuck on orange pulp, and orange pulp's all there is.

Oh well. Like I mentioned, actual book critics seemed to love it, so don't take my word for it. Read the first 38 pages and see if it clicks.
Posted by Kara at 10:42 AM