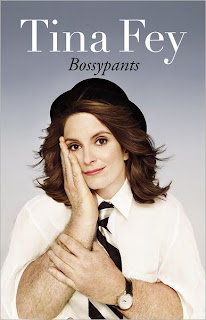 I'm an SNL fanatic, and Tina Fey is one of my writing idols, so it's safe to say my expectations for this book were slightly unreasonable....by which I mean I expected it to be the Best Thing Ever.

And I was so right! It was awesome!

When I tell my husband how much I love Tina Fey, he says, "Of course you do. She's you." Not exactly true -- for example, she's famous, and at least fifty times funnier than I am. I think he's confusing Tina Fey with Liz Lemon, who actually is a TV-version of me, as evidenced by the time she tried to shotgun a pizza.

But he may be onto something, because I spent most of the week yelling, "YESTHAT'SEXACTLYITTHANKYOU!!!!" at various passages in the book. I marked so many pages with Post-Its that the book looks like a kids' taggie toy.

My personal favorite is an excerpt from the chapter about her honeymoon cruise. A fuel pipe burst and the passengers had to wait at the muster stations to find out whether they'd need to evacuate the ship in lifeboats. After the cruise director finally assured everyone that the fire was out, she writes:


While people around me start to relax, I keep my eyes on the sea, waiting to be rocketed into it on a wave of fire. I'll be ready for it to happen and that way it won't happen. It's a burden, being able to control situations with my hyper-vigilance, but it's my lot in life.

Yes, that's exactly it, thank you! For years, I was terrified of flying -- I'd hyperventilate when we boarded, sob when we took off, pray until landing, and then eat everything available in the destination airport because I'd been too nervous to eat for the previous four days. I cognitively knew planes were safe, and couldn't figure out why I couldn't overcome the phobia. Finally I realized -- I wasn't scared of flying, I was scared that if I stopped being scared, the plane would crash from some sort of irony-wind-shear. This passage got a Post-It note and a star.

Then there's this excerpt from her "Prayer for My Daughter":


Guide her, protect her when crossing the street, stepping onto boats, swimming in the ocean, swimming in pools, walking near pools, standing on the subway platform, crossing 86th Street, stepping off of boats, using mall restrooms, getting on and off escalators, driving on country roads while arguing, leaning on large windows, walking in parking lots, riding Ferris wheels, roller-coasters, log flumes, or anything called "Hell Drop,""Tower of Torture," or "The Death Spiral Rock 'N Zero G Roll featuring Aerosmith," and standing on any kind of balcony ever, anywhere, at any age.

Yes, that's exactly it, thank you.

Other that that, I loved...well, pretty much everything else. Her missive on formula-feeding. Her insomniac internal debate about whether to have more kids. Her use of one of my grandmother's favorite sayings, "go shit in your hat." (Is that a Philly thing?)

Anyway. If you haven't read it, get on that.

And one last quote: "When people say, 'You really, really must' do something, it means you don't really have to... When it's true, it doesn't need to be said." (But you really should read this book.)
Posted by Kara at 7:07 PM